When Hubby was first diagnosed, the Veterans Administration sent us some equipment for his needs. 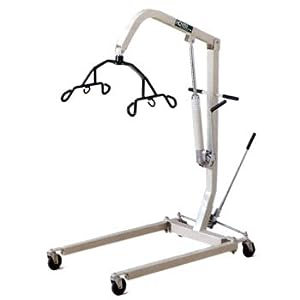 Hand rails, bath chair, bed side toilet and raised toilet seat. They even sent us a hoyer lift.
At the time we received the lift, the item wasn't needed. I did however know it would be used at some point. I stored it away. It came with an instructional VHS Tape. Bad thing, we no longer had a VHS tape player. I called and asked for a DVD but have never received it.

I found a you tube video that was some help in learning but to be honest, there is nothing like hands on experience. I'm a "Let me do it" kinda gal anyway.

Since I haven't used the Hoyer lift any I had it stored in my closet. It became a pretty good rack for my clothes. I had to unload it finally as Hubby had taken a tumble in the bathroom floor the other day and no amount of coaxing was getting him to understand how to get up. I have already learned to NOT try and help. The result could be injurious to not only him but to me.
So after I surveyed Hubby for visual injury and made sure that all his limbs were still movable I was left with 2 options. Call for help, get out the Hoyer.

Hubby was very certain he didn't want me to call for help but realizing I only had 2 choices he wasn't much resistance when I wheeled the contraption into the bathroom.

If I was the type of person to make a profit off of funny videos I could have made a bundle this time. But I'm not so your imagination will have to do.

First off Hubby was situated in a very awkward position. Awkward for 2 reasons. One was position the other was that he was unclothed and not easily moved. I had to get Hubby moved from this tiny spot by the toilet into the larger more manageable part of the bathroom. I couldn't slide his body across the floor so we, Hubby and I,  tried to get a bed pad under neath him. We managed to get one up under him enough to put a sheet around his chest and under his arms and I was able to drag him to better positioning for the Hoyer.

2nd I needed to figure out the sling. I positioned it over both arms and around his back fastening the belt around his chest.
Pulled the sling down as low as I could and tried to get it under Hubby's behind. Was only able to get it about 3/4 of the way but felt it was enough to at least raise him for better pad positioning that I could maneuver him a little easier. I attached the sling to the lift arm and as I raised my head I smacked myself on the head.

I raised hubby a few inches and placed a pad under him. At this point Hubby gave up all assistance with me and just lay there in the sling. I decided to just go ahead and raise Hubby up and slide a chair under him. I forgot to turn the knob for Up so when I went to use the pump handle, Hubby's elevator took a downward slide and Hubby has VERY WIDE EYES!! LOL!

Knob turned, for the correct direction I once again raised Hubby. The higher he went the funnier it appeared to me as his legs were stretching out and I couldn't get him to understand that he should try to put feet under him. I FINALLY just cranked him up, grabbed a chair, slid it under him and lowered him onto it. WHEW!!

Needless to say we need PRACTICE!!

Hubby and I both found this to be an amusing thing and we both laughed. I told him we needed to practice getting him up and down in that thing. He agreed.
Posted by Kathy Lowrey at Saturday, January 01, 2011