Things that go Bump in the night

Hubby and I had the pleasure of hosting our youngest grandsons first birthday party at our home :) 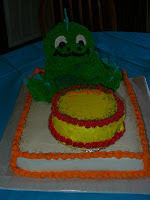 We had a house full of family, friends, and small children. 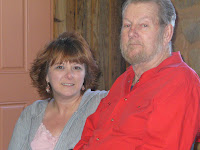 Hubby participated as much as he could and sometimes just his presence in the room was more than we expected.

Then the evening came.

Hubby's participation in family gatherings or anywhere several people are gathered together take a toll on him.
He has a difficult time processing the noise and chatter around him.
He does the best he can though.
The end of events leave him exhausted and cognition takes a bit of a hit. We usually get a bounce back the next day or so.
All these things I am well aware of and have learned to take them as they come.

I suppose a night of "Partying" was a little more than Hubby could tolerate though. I was summonsed out of bed by an out of the ordinary noise.
I ran to the bathroom to find Hubby standing at the bathroom sink with a death grip on it.
I helped him to a chair a couple feet away and watched him as he became glassy eyed and then shut his eyes, leaned back in the chair and proceeded to convulse like he was having a seizure of some type.
I pulled him forward into my chest and held on to him tightly, speaking reassuring words that he was ok and I was there.
I did this to keep him from stiffening out in the chair, banging his head on the wall, and sliding out into the floor. My hold on him would allow me to ease him gently down should that have become necessary.
I remained fairly calm.
I attribute this to my recent education on seizures from my friend Trish, who is a caregiver for her disabled brother Robert. Robert has epilepsy and experiences seizures. Through their willingness to educate and my willingness to learn, I feel like I was able to better handle the situation with Hubby. Knowledge is power.
You can read about Robert through Trish's blog, "Robert's Sister" here.

Hubby was able to stop the shaking he was doing. He realized I had him in the bosom of my chest so taking advantage of the situation, he plunged face first into it! I knew he was fine after that.
Hubby was extremely exhausted and after making sure he was stable I retrieved the wheel chair to escort him back to bed. I helped him settle in and tucked him in, gave him a kiss goodnight and we slept the remainder of the night.

The following night, last night, I was once again summonsed from my bed to find Hubby standing in our bedroom doorway. I asked if he was ok and he replied "No" then proceeded to convulse. I'm not sure if super fast is the proper phrase in describing how quickly I was able to envelope Hubby in my arms and hold him upright. Prepared to ease him to the floor if necessary. The wheelchair was so close and so far away to slide underneath him and if I could have maneuvered  Hubby around I could have grabbed it with my foot and pulled it, but we were stuck in our position until Hubby stopped convulsing.
Still in my tight grip embrace I was able to move Hubby around just enough to lean on the door frame, get my foot on the wheelchair and pull it to us. In the process I tangled my foot up in the wheel, ran over my toe and crashed into my knee.
Then I was able to set Hubby down assess me him and take him to bed, settle and tuck him in, get a good night kiss and sleep the remainder of the night.

I sure hope these incidents do not continue, but something in my heart says that this is just another decline in the course of Hubby's Lewy body Dementia.

Dementia doesn't happen only to the mind, but to the entire body.
Posted by Kathy Lowrey at Monday, March 12, 2012

Email ThisBlogThis!Share to TwitterShare to FacebookShare to Pinterest
Labels: convulsions, Over stimulation, seizures