One day we're UP next day we're down. The Lewy Body Life leaves one feeling like you need to take dramamine to get through the days some times. The following are a few FaceBook Status (stati? statuses? status'?) that I wrote over the course of a week and I'll follow up with today's adventure.
Tuesday, July 31: I've assembled a photo album for Hubby, old and new pics, friends, family, pets, cars, homes etc. I found him looking through it this morning. I have more to add and all of them to label yet but I am SO happy he likes it. I pray it brings him some comfort.
Wed, August 1: (Morning Status) Scary morning! Hubby took a fall and I feared he broke a rib. Had to call emergency personnel and make a trip to the Er. GOOD NEWS, NO broken bones and we are home and he's already up and annoying me by trying to walk around without assistance >:|
Learned a few things about being prepared with info. Working on having it all handy for the next time if we need it.
I also got to educated everyone about Lewy Body Dementia, everyone from Ambulance personnel to ER Drs. (I) Passed out Lewy Body info, "Educate yourself and share" was the motto of the day .

The only down side was having to drive the speed limit behind the ambulance. SERIOUSLY?!! You're an ambulance, you can drive fast, it's ok and the person behind you can too!! No lights, no siren, no speed, I got jipped :/
August 1: (Evening Status) Dear Lewy Body hallucinations. It's always interesting when you come to visit. I don't remember there being as many before but perhaps today's excitement and demerol shot brought you out into the light. Either way please pick up after yourself and your pets, mind your manners, be friendly and practice the be seen and not heard rule. Thanks and don't stay too long :)
August 1: I almost forgot the Quote of the Day while waiting in the emergency room:
Hubby - "Well, that's 2 things I got took care of."
When asked what they were
he said "First was the memory problem and (pause) I forgot what the other was."
BIG SMILES! :)

Thursday August 2: My Hubby, who can barely walk, has a terrible lean and must hold everything in his path to shuffle where he wants to be, just got up and walked upright from my comp room to our bathroom in a normal fashion and normal pace without assistance. I'm still stunned! This is the seriously hard part of Lewy Body Dementia, we never know what a day will bring :/
*Oldest daughter and her smartypants self, a trait I'm SURE she inherited from her father, brought it to my attention that I was complaining about having a good day. Well, all I have to say to that is (raspberries) :P' but don't tell her LOL!! ;-)
Saturday August 4: Somebody's wearing their grumpy pants today and I promise that it isn't me or the dogs! I think I'll try and keep a low profile this morning :/
Monday August 6: This is turning into an interesting day. Since 6:30ish Hubby has needed my attention every 15 mins for one thing or another. When 30 minds passed by at one point I had to check and make sure he was ok. 15 mins later, "Hey, Hun?" So far I've been successful at getting, finding, doing, answering and keeping the calm, but I already need a nap. (it was 10:30 am at the time)

So there is a week in fast forward. Yesterday afternoon Hubby wasn't as needy but just in general he feels bad. His mobility issues continue to decline but the stubborn guy refuses to give up to the wheelchair. His last request was just as the aide arrived and he wanted me to make him something to eat. I did. He was asleep when I returned from my workout and I asked home Health Aide if he had gotten up to go to the bathroom while I was gone. He had not. He slept through the remainder of the afternoon, I took him some supper and woke him but he went back to sleep and slept through that too. He remained asleep through the night and only woke this morning to ask for a coke and cheese with crackers. Not my idea of a breakfast but he got what he wanted and was happy. Back to sleep he went.

I busied myself with all the important things like computer time and dog play, decided to load the dishwasher and restart the dryer on the wrinkled clothes. That makes me think, I need to do that again. My work is NEVER finished! ;-)

As for my own self, I'm still struggling with my tiredness but I try to sleep when I can and today was no exception. I crawled into my bed, I positioned myself to watch Hubby as he lie in his bed. He was so still. At moments like that I stare hard at his chest to see it rise and fall, it did, I allowed mine to do the same thing. My heart ached for Hubby. He has felt so bad and so weak it seems, and I just don't know what to do to make it manageable for him. I know I can't fix it but surely there must be something. I'm a fixer gosh darn it and I can't fix it. Hubby's table was blocking some of my view of him so I got up to move it. When I did he opened his eyes and looked at me. We locked eye contact and I told him to scoot over.

Now a normal hospital type bed is designed for one person. but today we made it a double and then some.
Hubby smiled as he tried to scoot over. I crawled up next to him and shared his pillow. Him on his back, me on my side. I stuck my head in the curve of his neck, placed my arm over his chest and he held my arm. Just like old times.
I didn't worry that he didn't know me or get my name mixed up. I didn't think he might be uncomfortable because from the smile on his face when I said scoot over I was sure he wasn't. I only thought about the moment and I took advantage of it even if it would only last for a few mins.
As we nested in we were joined by the 2 dogs, Lady and Booger.
Hubby and I thought this was funny.
I realized I had fallen asleep when I woke up cold. I tried to grab the blanket but realized I had my arm up under my head and it had fallen asleep too. When I tried to move it Hubby opened his eyes and just as I pulled my arm out, I fell off the side of the bed onto the floor mats. Hubby and I busted out laughing! He tried to hold on to me to no avail and I tried to brace myself the best I could. Booger got excited that I was up and jumped down off the bed to come and see what I was doing on the floor. It was a truly wonderful moment and I am ever pleased that I placed those exercise floor mats. At least I know should Hubby fall out of bed, the mats will cushion the fall :)

We had such a fun moment that I tried to recreate the sleeping arrangement but it wasn't easy to do.
You kind of get the jist though.
A person also notices their need to make some upgrades to their homes when they post photos depicting the inside of it. I never was able to finish my room makeover and the closet doors are missing because Hubby had fallen into them so much he actually broke them off, I just decided it was best not to replace them.
OH,  and nobody mention the need to cover my "natural highlights".
Hubby, Kathy, Booger and Lady. 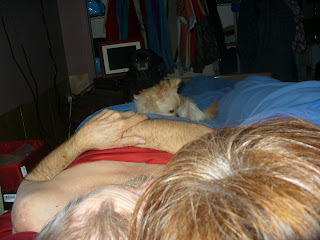