Morning, Sunshine, or not

Yesterday Hubby woke up!
I was actually surprised and pleased.
But the pleasure was short lived as it became apparent Hubby was having a tough day.
Besides communication issues his delusions took full charge.
Hubby cried as he tried to, in hushed tones, explain he has been taken out of the hospital by 5 men, carried off into the woods and assaulted.
It was difficult to understand his story but I pieced that not only had that happened to him but to others and he feared that he was getting blamed and the police were looking for him to throw him in the pen.
His tears broke my heart, his fear was real and nobody could ease his mind. The story continued through the day in typical Lewy Body Dementia fashion. It came and went replaced with other incoherent conversation.
He slept through the night but our morning started at 4am.
Hubby was calling for me in weak tones. He even stated he was very weak, so tired. I had to lean in very close to hear him. I cried and prayed over him. I hugged and kissed him. I told him over and over how much I loved him. I held him as best I could from the side of his bed. I noticed how small he felt and fragile. My heart was hurting for him and for me.
His hallucinations picked up where they left off, his delusions were gaining speed.
He extended an arm out to the air and shook hands with an individual I could not see.
Then everything fell apart.
He was mad, mad, mad!
I had no idea why but I'm blaming it all on the invisible guy I'll call Mr Lewy Body Dementia! Troublemaker!
Hubby didn't just call for me, he yelled for me in loud, strong clear harsh tones. Demanding my presence. His anxiety shot up and he even became combative.
Once he told me to get my butt off the couch. I was sitting in a chair right next to him.
I offered anything I could think of to help settle him, water, coffee, juice, cola, but he continued his demanding. He was swearing and even threw his padded shoes he wears that protect his fragile skin on his feet.
He wanted off the bed.
I was standing at his side, he asked me if I was going to just stand there twiddling my thumbs. I responded that I didn't know what he wanted me to do. He gave me the stink eye , pointed his finger at me and said "FIRED!"
Great, I just lost my job so apparently there is an opening for a caregiver for Hubby. Any Takers?

It was a rough morning and anxiety was rising for everyone here. It reached a climax when he grabbed his IV lines and pulled his medication pump until it was trying to yell for assistance as much as Oldest daughter and I were while wrestling the lines away from him and pushing buttons for help.
FYI, don't let an older persons ill health fool you, they can be VERY strong when they want to be.

We eventually got the lines away, Nurse came and fixed the pump and checked everything out to make sure it was all working properly. She called the Dr and he ordered some more anxiety meds but when she came in to give them to Hubby he tried to fight her so I had to physically hold him down.
Poor Hubby, to see this happening to him is so distressful.
He's not even "here" when he is awake and he is experiencing fear and anxiety more than not. There is no need for him to suffer like that so a decision was made to sedate him and keep him that way. Now he has no stress in his face. His forehead is smooth. He doesn't jerk or twitch or move around. No incessant chattering or pulling of invisible things. No tears, no fears. Just peacefulness and calm.

He has seen his loved ones, they have all said their goodbyes. 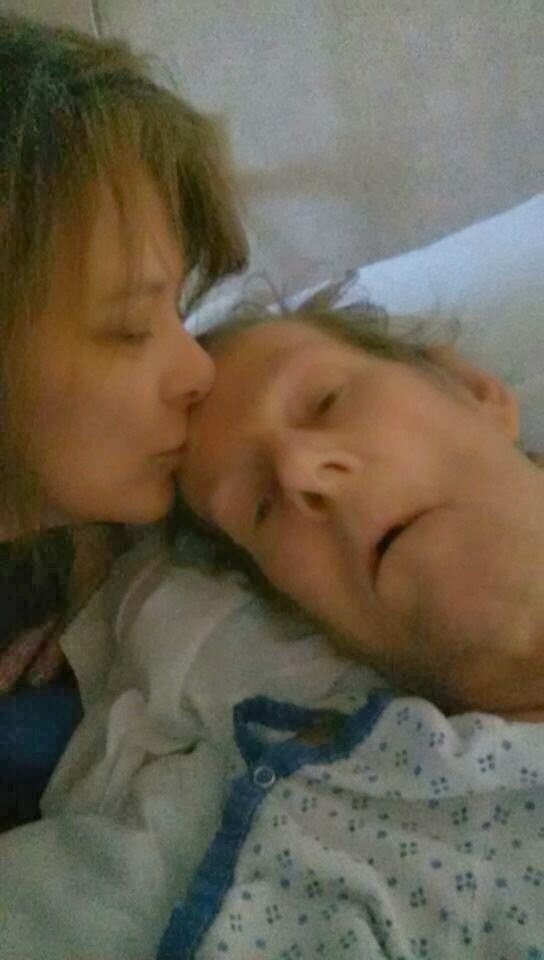