Ever so slowly I have felt the tightness of grief.
I wasn't blaming it on depression. I've been there before.
Feeling of sadness and hopelessness. Brain fog. That lost alone feeling.
In my mind, this is depression.

No this is something different to that.
Then a situation outside of caregiving tipped the scale and now I feel like I'm in the stranglehold of anger!
So here goes.

Over the last few months Hubby has had good and bad days. More bad than good.
Lots of cognition issues, LOTS of his own anger issues we have tried to deal with and cap. Still no solution to that though.
Mobility has declined and I explained to his Dr at a recent appointment that Hubby wanders but don't get it in your mind that he stands up and walks across the floor with no issue. He clutches everything as he makes those tiny little shuffle steps and pulls himself along all the furnishings. Many times, almost every actually, he will get where he wants and then he "Honey"s me to come and rescue him with the wheelchair for a ride back to our room.
He still suffers with his back pain and his neck has decided to flare up and join the party.
His headaches that he used to complain about on a daily bases associated with his PTSD issues have returned.
Lack of movement, muscle atrophy and neurologic stiffness associated with the parkinsons type symptoms.
Falling is still at high risk. Hubby has already suffered 2 compound spinal fractures. I don't know how to make him understand he needs assistance with walking. He is still a very proud man and he would rather crawl where he wants to be than have anyone (besides me when he needs me) help him. His words.
He is so dependent on me and my presence. I get "Honey"d so often I may become a diabetic! Even Booger the dog gets up and moves toward the door when he hears it.

So now to the constriction.
I'm angry because... (random order)


Oh this list could get so long but you see what my mind is dealing with. I think it's time to make some steps to see my own Dr and address these issues.  I don't want to let my joy be squelched by anger. And mostly I don't want to squelch my witness of Gods great love. Getting trapped in anger is scary for everyone!

So since I've whined all over this page and honestly, just getting that out seemed to help. I actually forgot some of the things I was going to list! I want to end with something positive.

A few years ago I built a small deck off the side of our home. Hubby and I could sit outside on the swing and enjoy the weather when it was enjoyable and he felt like it. Just a few times for him though. 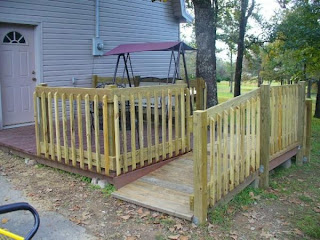 This year I hired a crew to put a roof on it. maybe Hubby would want to come out more. I felt it best to hire professionals for the roof due to an electrical issue. They did an AWESOME job! Now Hubby and I can sit outside, heat permitting, and he (we) can be protected from the elements. 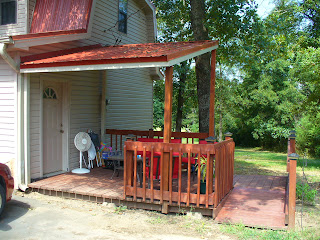 I had also been thinking of building a ramp off the back of the deck. I'd like to connect this side deck with the one in the background of the other picture. I built that deck for our youngest daughters wedding 4 yrs ago. At some point I want to put a gazebo roof on it. That's a BIG dream for me right now so I'll stick with the ramp since I know I can do that. 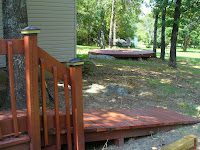 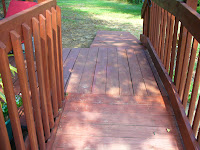 And I found a surprise under my deck when I was building the ramp. Remember the kitten my sister in law sent me? If you don't, you can read that here.
We named her Shadow. She is a very affectionate and loving cat. Some days she gets run of the house. We like her. And apparently another cat liked her too because I found 3 kittens under my deck that belong to her! Note to self, shadow needs a vet appt.
My goodness they are already big and how I had NO idea she had them is beyond me. They are the most playful, friendly and loving things. You would never know they had no human contact before.
2 solid blacks, 1 tortoiseshell. All 3 have blue eyes and one of the black ones has a stumpy tail. From the feel of it, the tail never elongated. It has a tip but it's crooked and adorable. It's my favorite and it likes me as well. Booger the dog thinks I got him toys to play with. 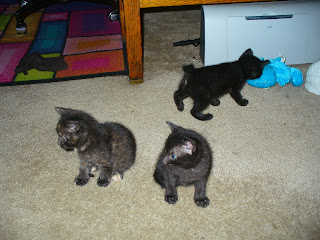 And most of all I want to say Thank You!
I have received some of the sweetest and most supportive comments from you. Thank you for your concerns and encouragement. Thank you for reaching across the near and far miles with your support. I want you to know that I have you all on my daily prayer list. For those I have no name for, God knows who you are.
I pray he blesses you all with His Peace and Comfort. Thank You Thank You!! This journey would be SOOOOO much harder without your support. I only hope that I can or have offer/ed you the same in return.