So Hubby and I were able to be present at the birth of our grandson a few days ago. Not even Lewy Body Dementia could stop us that time.
We had to leave earlier than I wanted to but Hubby declined and getting him home to safer and more comfortably familiar surroundings was priority over my heart desire.

BUT my head started to think...

We did have a few good hours, Soooo... Surely we could do it again, this time after a nights rest and planning. Surely?

I made the executive decision that we would go back.
Knowing it takes a GOOD 2 hrs to get ready to go anywhere I allowed plenty of sleep time and as there was no schedule we needed to be on, it seemed like a good thing. I should have known there was trouble looming in this the moment Hubby asked if I could go without him.
Uh, NO! If you don't go I can't go. (sad face)
Hubby agreed to finish getting ready.(Happy face)

I showered while he ate.
Now Lon Kieffer, aka DOC, founder of Defender of Caregivers has a FB posting that say..
"You might be a caregiver if..."
I posted the following...

You might be a caregiver if you shower and use girly smell good shampoo, conditioner, body wash, lotion , body spray, powder, hairspray etc then shave your husband to only smell like aftershave ;-)


2 hrs passed and I was still trying to get Hubby out the door.
We got all the way to the front door when he decided to stop and speak to all the cats outside the window (actual cats). My mind is pushing, Hubby, you can actually walk out the door and speak to them as we move toward the car.

I think I'm getting a little anxious at this point.
FINALLY Hubby makes it down the 2 steps when I realize, I already loaded the wheel chair. I run to get the chair out of the trunk so he can ride to the car.

Loaded and locked and away we go. Hubby Niece and I!
It was a nice trip there. It's over an hour drive but the anticipation of seeing our daughter and son in law and, who am I kidding, that NEW GRANDBABY!!! made it seem to go by much faster.

Son in law went on a lunch retrieval after we arrived so we all enjoyed a nice lunch and visit.
We pictured and paparazzied the baby and our daughter and son in law. 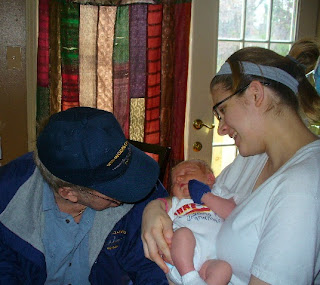 Hubby was a little needy but all due to the unfamiliar surroundings; so, no biggy

Hubby had melt down mode.
While sitting in a dining room chair, hubby slumped over and could not sit upright or stay in the chair. I was eventually get him propped up enough to keep him supported and he eventually was able to support his own self  in the chair. I told Hubby I felt it was better for us if we went home to more familiar surroundings. Hubby was reluctant to leave but agreed so we made an early departure.

On the way home I decided that travel would now be out of the question for us. I feel fortunate that Hubby was able to regroup but how much would our luck hold out on that ability.

Once we arrived in town Hubby asked me to drive to get something to eat. I really didn't think it was a good idea but he was out and maybe he was feeling better so I agreed. As we headed down the road I asked Hubby where we were going. He never did tell me just said , turn, turn at certain roads. Frustrated I gruffed, "Where are we going, there is no place to eat in this area!?"
Hubby decided he wanted to drive down by one of our rental homes. The same home he had been talking about moving into and on his own but I don't think about THAT part until I pull up into the driveway. STUPID STUPID ME!!!
Hubby opens the car door and proceeds to get out. I ask Hubby to explain why we had to leave our daughters because he can't sit up yet he thinks he can walk around a piece of property. Hubby stares at me. Niece, who was in the back seat, suggested Hubby might need his walker. I snapped at niece to sit quietly and stop offering suggestions.

Hubby clutched the car door for a while then a very nearby tree for support. Realizing he would not be able to proceed any farther he decided to get back into the car.
Sneaky Hubby!! By this time I was a little more than miffed.
Hubby closed the car door, I said buckle up as I rounded the corner and headed for home.
Once we hit a main street Hubby told me to go one direction and I went toward home.
Hubby, annoyed that I wasn't listening to him made a "Well, SH**" comment. I told him that those were my exact sentiments.
The LAST thing I wanted was another incident that had to involve the police because Hubby refused to leave somewhere.
I didn't want it for him, and I didn't want it for me.

I HATE having to use the authority I was given. More than anything I have tried to preserve his dignity throughout this entire process. I REFUSE to call his disposable undergarments as diapers. It's feels degrading for me to say it and I correct him when he does. I NEVER say I need a baby sitter for him. Hubby isn't a baby even though he can act like one at times. I'm not to bad about acting like one myself. Read up about the sad face remark.
Hubby is losing SO much of his dignity. I am trying so hard to hold on to every shred I can and when I have to make very hard decisions I feel like I am ripping it off him like a piece of flesh and it hurts, even me.

So I believe we have reached the end of our going.
We shall now remain home unless we have Dr appointments, I try to schedule those as far between as possible.

I've always been good at pushing my luck. You can ask my Father.
He has been know to say to me on more than one occasion,"You're pushing your luck!"
Posted by Kathy Lowrey at Saturday, March 12, 2011