I will gladly pay you Tuesday for a hamburger today

Because of the shaking disorder associated with Lewy Body eating has become a chore and frustration for Hubby.
Finding finger foods he likes has been a little challenging for me but I'm very sure less of a challenge than him trying to eat from utensils. So he has settled on Malt o meal and hamburgers.

Why? That's a good question but all I can do is guess.

You see, Hubby has had several embarrassing moments with food. Falling down and dropping an entire plate of food at a family function once. He was pretty annoyed with himself and the fuss the family made over him.
Truth be told he gets pretty mad when anyone tries to help immediately.
He dropped an entire plate of food in a restaurant buffet line once. He was so mad at himself but I tried to assure him all was well and we would get another plate. We didn't stay very long after that.  Our eating out has dwindled to almost none unless we have a dr appt or he is having a SUPER DAY!

These days whenever we get that rare opportunity to eat out we ALWAYS go someplace we can be waited on and food brought to us. Including any salads or drinks

Because Lewy Body has many of the characteristics of Parkinsons he shakes. When he gets upset he seems to shake more but that might be anxiety. Eating from utensils is difficult so I try to avoid foods that will easily fall from a fork. But even foods spooned and pierced are shaken from the utensils. Cutting foods is especially difficult so I try and cut things before he ever gets his plate and should we be someplace public I discreetly try to cut for him as to preserve what independence and dignity he feels he has left. Many a time Hubby has refused to finish eating and left food on his plate just from sheer frustration.

Finding the line between helping and babying has been a challenge for me. He wants to be so independent and to a point I just let him. If it's walking a long distance without assistance (scares me so I follow with the wheelchair or walker I bring "Just in case you get tired" and he always does), closing a car door (several attempts), buckling a seatbelt, carrying a beverage (even if it spills) things of that nature.  All those seem like they would be easy tasks but to Lewy they are huge chores.  Once I notice frustration setting in I assist, suggest or find other ways to distract while I take care of the need. Stealing a kiss is a good distraction while I reach across and buckle a seatbelt and securely close the car door ;-)

So back to the hamburgers. With a hamburger, Hubby can hold it in his hands. He doesn't want anything on it but mustard and he mashes the bun flat on it. This prevents the bun from sliding off and he has control over the food getting to his mouth. With the Malt O Meal I can make it thin enough to drink from a straw. I purchased Hubby an over the bed table about a year ago. Hubby only eats in his room so this was the perfect purchase. Since the table is adjustable Hubby can raise it to the level he need to "drink" his Malt o Meal or eat his food. That position is usually right up to his face. 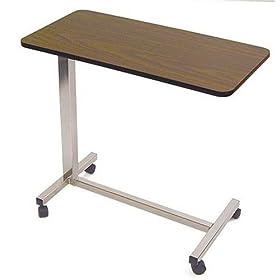 There are other styles available but this particular one suited our needs.

I also purchased a travel mug . Short and squaty with a lid. The hole in the lid is just narrow enough to prevent the staw from easily falling out yet wide enough to be able to draw fluid through the straw adequately. 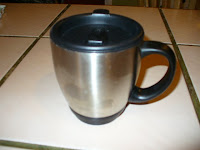 These items and actions are just a few of the things that help make Hubby feel independent still. As long as he can manage I say let him.
Posted by Kathy Lowrey at Sunday, January 17, 2010