So Hubby had a week of sleep. The last appointment with the Neurologist assured us that was perfectly fine. I trust Hubby's Neurologist so sleep he can do if he wants to.
I just wish he wanted to at 4 AM today.

Still sore from 2 days of shoveling and emotionally brain tired I myself have been heading to bed a little earlier than normal. Hoping for rest, not just sleep.

I suppose Hubby got his sleep caught up because this morning he was up at 4 AM.

Our bedroom is situated right off the kitchen so I heard Hubby opening and closing cabinet doors.
I listen for 'scary" noises like falling or unsteady walking. I can even distinguish if he has opened the cabinet we keep the BC Headache Powder in.

After I decided all was well I closed my eyes. Then I heard the rattle, crinkle, rattle, crinkle, crinkle. On and on for what seemed like a 4 AM eternity. I lay there and debated getting up or waiting it out. Knowing I am NOT a morning person and never claiming to be and have serious doubts I ever will be, I chose to lay in my bed and try to go back to sleep. I knew if I got up I would more than likely sound gruff and annoyed and I didn't really want to start my day or Hubby's day like that. After a while the horrid noise stopped and I went back to sleep, or cat napping. Hubby rattled around in the kitchen opening the fridge, cabinets, drawers, rifling through the utensils and glasses. At 6:30 AM that horrible rattling started again.

Now it is beginning to grate my nerves.

Again I lay there hoping, praying that the noise will stop. I couldn't quite make out what the noise was, the inside of a cereal box? a chip bag? Whatever it was seemed to get louder and louder in my head until I finally got out of bed marched into the kitchen. Quickly surveyed he was attempting to open a package of sausage biscuits (you know, the kind that you must open with a pair of scissors because the glue they use on the package is industrial) by hand when gruffly (I told you) said  "Let me do that" Poor Hubby got scared out of his wits when I spoke. I took the package from his poor shaking hands, grabbed a knife opened the package and nuked the stupid biscuits. Reached over and hit the brew button on the coffee pot and sulked into the bathroom.

I retrieved Hubby's biscuits from the nuker, asked him if he had his mustard which he retrieved and applied himself. Then he came into my computer room where I set up a table for him and he sat with me while I drank my coffee and checked e-mail.

Now I sit and reflect on the morning and all the things I should have done differently but didn't and honestly in the same situation would probably do again. The truth is painful.

I am also reading some blogs about Valentines. Gifts received or remembered. One blog, written by a friend of mine, in particular made me laugh out loud. She received a beautiful bouquet of flowers from her husband and learned she was receiving a pedi/manicure. She knew this not because she had received it early but because she noticed the charge on a credit card receipt! Now when I read this, I wasn't laughing AT her I was laughing because I remembered all the times I received flowers from Hubby. Oh the flowers were beautiful, don't get me wrong. I love flowers. It was just that  2 weeks later I always received the bill that came with them LOL!!!
I can remember 2 times I never got the flower bill.
The first time was when I had given birth to our first child 27 years ago. Hubby sent me a dozen red roses. So beautiful. 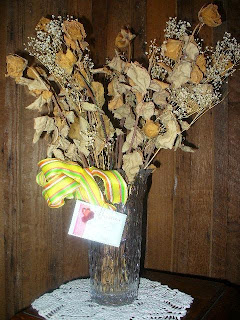 The second was Valentines 2007. Hubby and I were trying to reconcile after a long, painful and bitter separation.
They were a dozen yellow roses. That was the last time Hubby ever sent me flowers. Shortly thereafter he was diagnosed with Lewy and Lewy doesn't celebrate anything.

I don't know why but I dried those flowers. I hung them upside down in a spare closet and now they are a display in my living room. I would like to find a glass box to put them in but finding one hasn't been a top priority.

But every time I look at those roses, I smile.
Posted by Kathy Lowrey at Sunday, February 14, 2010