The subject was discussed again while looking at the digital picture frame. Hubby really enjoys looking at it and talking about the people in the pictures and the places they were taken.
I always get tickled when a photo I did not take personally but have possession of  pops up and he will ask me where it was taken. Having no idea I tell him I do not know. Hubby gets a little suspicious at this answer. He thinks if I have the picture I had to have taken it and I just don't want to tell him about it.
He likes to talk about the things in the background. In particular we have a photo of a grandson on a lawn mower we used to own. Hubby asks me where that mower is now.

We talk about the kids and grandkids. Our families and our friends.

I even have some random photos of our cats and home before and after we did the new roof and siding.
Hubby recognizes the before picture of our home as where he used to live but most of the time thinks the after picture is of a different house.
There are photos of the snow we have gotten and a big beautiful moon that comes up just at the end of our driveway. It's stunningly beautiful and I am awed every time I see it come up as though it has risen from the field across the street and sitting on the ground in our driveway.

I used to tell my children that their Daddy loves me so much he gave me the moon. 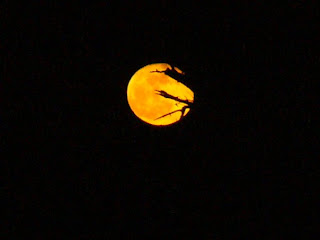 I posted a picture of my moon once commenting that it was nice to have something that gave me a little peace since we had had some pretty bad days at the beginning of Hubby's illness.

Our oldest daughter in an effort to be supportive and loving made the comment "Awww, the moon Daddy gave you"  to which I replied, in my sarcastic and glib way I have. "Yep, Daddy moons me almost every night" We both laughed about that comment! She also informed me that was TMI! Too Much Information (giggle) 'What?" LOL! ;-)

So as Hubby and I were watching parts of our lives flash before our eyes, a picture of my mother (now deceased) popped up. Hubby has lost the connection relating me with my mother. He remembers her as familiar and has a difficult time recalling her name but can not make the connection that she is my mother. During our conversation about her he got her confused with a good friend of his (now deceased) thinking perhaps my mother was his friend or that my mother was related to his friend. I don't think we ever got it straightened out. The longer I kept trying to sort it out, I may have even gotten confused ;-)

What he did recall was the fact that she (both of them) was deceased and her remains had been cremated. This is what started "The Talk".

Hubby and I have had the talk several times before. We have both decided that we would like to be cremated when we pass away.  We stated many reasons from cost, plot care even to visitors. We concluded that it was the best option for us. I am grateful that Hubby is and was willing to discuss such a sensitive subject at the beginning of his illness and that he can still remember what his wishes are. Death is not something we can hide from, sweep under the rug or avoid. We should all make plans for it or at least discuss our wishes with loved ones.
Knowing what my spouse wants will not make the loss of him, should he go before me, any easier but I will not have doubts as to whether I am doing the things he wanted or not. I have relayed this information to our children also so they are not surprised when the time comes or they will know how to proceed should the duty fall to them to take care of.

Hubby has made one request. He asked me to make sure his dress pants and shirt were cleaned. When I asked his reason why he said, So he could dress nice for the ride. I took them to the cleaners and he has been satisfied that they are hanging in the closet wrapped in their plastic.

My father suggested that when he passes away he himself would like to be cremated and turned into a diamond. I thought he was crazy when he suggested it but I looked into it at  Life Gems.

I have boasted about the fact that my maternal grandmother was named OPAL and a my Paternal Grandmother was named RUBY so that makes me a true gem. An option that seems a fitting end to my mortal existence. Although, I wonder if I should be concerned about being stolen and pawned.
Posted by Kathy Lowrey at Monday, February 22, 2010